Marie Guerline and Penny lead very different lives in Haiti and Toronto, but one thing unites them: their sons. http://bit.ly/2olSBy0

Meet Marie Guerline and Penny. They lead very different lives almost 3,000 kilometres apart, but one thing unites them: their sons, David and William, both have congenital heart defects and were treated at SickKids.

Before Marie Guerline and David, 5, left Haiti for Toronto, they had to travel to two other countries for testing because no hospital on the island nation had the necessary equipment for such a complex cardiac diagnosis - double outlet right ventricle, sub aortic ventricular septal defect and pulmonary hypertension.

At the age of one, David broke his leg and a local Haitian doctor detected a heart murmur during the assessment. David was referred to Haiti Cardiac Alliance, an organization dedicated to working with partners to scale up the availability of life-saving cardiac surgery to all Haitian children who need it, who helped facilitate three important steps in David’s health care journey.

First, they arranged for David’s first echo with their doctors and his first catheter diagnostic procedure in the Dominican Republic in 2016.

Next, they helped with David and Marie Guerline’s travel to Cayman Islands in the hopes of having surgery there. Unfortunately, after the hospital conducted their catheter procedure, they determined that David’s hypertension was too high and posed too many risks. Therefore, they decided not to proceed with the surgery.

Lastly, they helped connect Marie Guerline to SickKids. David was approved for surgery at SickKids through The Herbie Fund, an international patient program that offers financial support to children worldwide who require specialized care.

In December 2017, four years after his first diagnosis, David and his mom arrived in Toronto. Their host family greeted them with open arms and open hearts.

“At first I was very scared and stressed,” says Marie Guerline. “I didn’t know what to expect, coming to a new country – during winter – to live with strangers and for something as intense as my son’s open heart surgery. Now, I feel fully integrated into the family. We spend a lot of time together and this is an experience that will be forever engraved in my mind.”

At SickKids, Marie Guerline says “everything is different.” There is a lot more testing for David, and a lot more explanations, for them both. She marvelled at how the doctors took time to make drawings of David’s heart to illustrate how it should look and explain what would happen during and after his surgery. She also noted that the nurses have a lot of patience and affection, and were all very kind and calm, especially when David got a little panicky as his anaesthesia wore off.

David is very sweet and has a surprising amount of energy – people are often taken aback given he is a heart patient. “Now that he’s had his surgery,” says Marie Guerline, “he’s really on the move, smiling and running down the halls at SickKids. It’s amazing.” 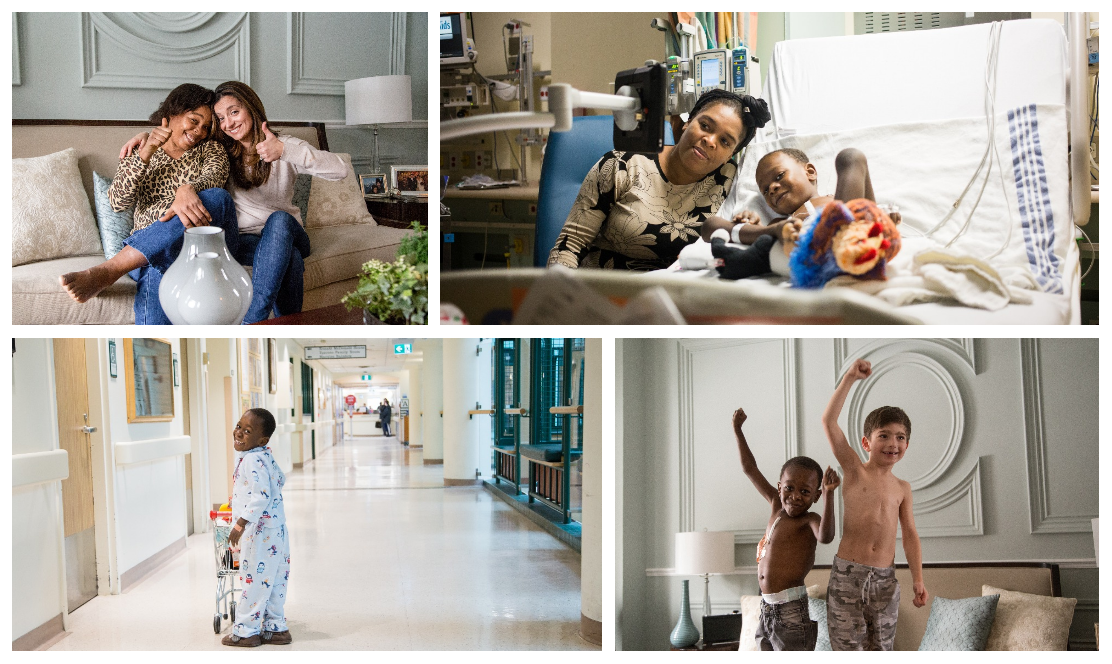 “Where you are born should not impact your access to medication or health care services."

Within five minutes of reading a Toronto Star article that her husband Joseph emailed, urgently requesting families to host one of three cardiac patients from Haiti who were unable to access treatment in their home country, Penny called him and asked “We’re hosting a family, right?” Penny lives in Toronto, not far from SickKids, and was moved by the story.

“Where you are born should not impact your access to medication or health care services,” said Penny. “As parents, we all want the same thing: healthy and happy children. My husband and I knew that hosting Marie Guerline and David was something we had to do, especially given that our sons both have similar heart conditions.”

What’s more, Penny says, “If David had been born in Canada – like our son William – his heart condition would likely have been repaired in the first few months of his life. David is now five years old. That’s an incredibly long wait for a parent.”

Penny feels that one of her biggest responsibilities as a host mother is to be a strong advocate for Marie Guerline and David, in the same way she was for her own son.

“SickKids is a big organization with a lot of moving parts. The information and discussions that faced Marie Guerline were complex, from catheterization tests to dental work to blood tests, it’s overwhelming. I can help by asking tough questions and being there to support her in the three languages she needs: the SickKids language, cardiac mom language, and French!”

Penny adds, “What’s been really special to see is the interest that William has taken in Marie Guerline. He doesn’t speak French, but he’s always saying ‘mom, translate!’ and then he’ll reassure Marie Guerline that David will feel better and stronger after his surgery, like him. I am humbled for my family to be their support network.”

Penny’s husband, Joseph, plays with the kids while she and Marie Guerline prepare dinner and enjoy a few moments of calm. He says the experience of hosting has helped his family see the world in a different way and he’s looking forward to learning more about the impact this experience has had on William and his younger sister Elle as they grow up.

“All heart moms connect,” says Penny. “We have a certain perspective that goes beyond nationality. We have a unique bond.”

Since The Herbie Fund was established in 1979, over 805 patients from more than 106 countries have been treated at SickKids. To learn more, visit: www.herbiefund.com